Tips on Budget Travel This Week on Get Packin'

If the cost of travel is keeping you from seeing the world, our guest this week on Get Packin' has some money-saving travel tips.  Russell Hannon (@Russellhannon) is a self-described ultra-economical travel expert and the author of "Stop Dreaming, Start Traveling".  From things to do in preparation for travel to money-savers at your destination, Russell will share some of his best suggestions when he joins us this Saturday afternoon at 4:00 on Freedom 95 (95.9 FM & 950 AM and streaming at freedom95.us).

Our Top Ten list this week is How to Spot an American Abroad.  Spoiler Alert: fanny packs are involved.  You might as well wear an American flag t-shirt and a 'Make America Great Again' hat. Tune in to hear the other nine.  Long lines at TSA checkpoints at U.S. airports are making headlines. We'll have the latest.  And once you get through those lines, which airline has the best frequent flier program?  You'll want to know the answer.

Royal Caribbean is about to launch the world's largest cruise ship, the Harmony of the Seas.  This thing is HUGE!  We'll give you the dimensions and what you'll find on-board.  Finally, a Memphis-based flight attendant has been indicted for stealing from her workplace.  But wait til you hear exactly what she stole.  All that and more this week on Get Packin' on Freedom 95.

This Week on 'Get Packin' 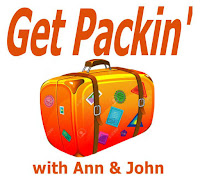 In more than 30 years of broadcasting, this Saturday's edition of Get Packin' may be the first time we've had the phrase "Full Pig Experience" used in an on-air interview.  It comes courtesy of Mark Newman, Executive Director of Visit Indiana, during a discussion of Fair Oaks Farms, just one of the great places to visit around the state of Indiana.  Mark will explain that and touch on many other Indiana highlights on our show this Saturday afternoon at 4:00 on Freedom 95 (95.9 FM & 950 AM in Indianapolis and streaming worldwide at www.freedom95.us).  Did you know "landlocked" Indiana boasts one of the best beaches in America? Mark gives us the lowdown on that, too.

This summer is expected to have the lowest airfares in more than five years.  We'll have the Top Ten best airfare deals to destinations around the world.  To haggle or not to haggle? That is the question. Or what about giving to panhandlers?  These are just a couple of common moral dilemmas we face as tourists to foreign lands.  We'll have advice on what to do when confronted with these potentially uncomfortable situations.

DON'T BE UNCOMFORTABLE IN A RENTAL CAR. CLICK HERE TO READ WHY SIZE MATTERS IN EUROPEAN RENTAL CARS.

You'll be surprised to find out how the TSA made more than $765,000 last year.  You may have contributed to their windfall.  And speaking of falling, a tourist in Lisbon, Portugal climbed a building facade in an attempt to take a selfie with a 126-year-old statue.  Spoiler alert!  It didn't end well.  All that and more on this week's edition of Get Packin'. Tune in Saturday afternoon at 4:00 on Freedom 95.

When it Comes to Rental Cars, Size Matters

As told by John.

When people who have never been outside the U.S. ask me where they should go as an introduction to international travel, I always suggest England.  The common language, familiarity with British history and highly recognizable landmarks like Big Ben, the Tower Bridge and the queen's ever-present purse make it fairly easy to acclimate to their culture.  Then they ask about the driving.  Yes, that whole driving-on-the-other-side-of-the-road thing does take some getting used to.  But you also have to be careful what kind of rental car you're getting.

My first time to Europe was a trip with Ann to France and England in 1996 for our first anniversary.  After a few days in Paris - sans auto - we made our way to London.  First stop: the car rental counter at Heathrow Airport.  Like the good travelers we are, we had already made our rental car reservation well in advance.  But in an effort to save a few pence, and since it was just the two of us, we reserved a compact car.  We approached the rental agent - a good-natured young Brit - and handed him our reservation.  Without a word, he gave us the once-over; looking at our two oversize suitcases, two carry-ons and my substantial six-foot three-inch frame.  Moving his gaze back to the reservation and spotting the word "compact", a wry smile came across his face.  Still looking at the paper, and with a chuckle in his Monty Python-esque voice, he said, "Oh, one of THOSE."

CLICK HERE TO READ ABOUT ANOTHER RENTAL CAR MISADVENTURE

Much the way clothing sizes vary from country to country, a "compact" car in the U.K. isn't what you know as a "compact" car in America.  If you attached a telescoping handle to the front bumper of a British compact, it would make a perfectly suitable carry-on and fit quite nicely in the overhead compartment.  The rental agent immediately realized there was no way I was going to fit into the four-cylinder Samsonite, much less all our luggage, and was nice enough to give us an upgrade.

Our first vehicular tragedy averted, it was time to tackle the left-side driving... with a manual transmission!  Oh great.  Not only do I have to sit on the right side of the car, drive on the left side of the road and navigate the crowded, narrow, unfamiliar streets of London, but I have to do it with the gear shift in my left hand.  Sheesh!  Why didn't they just give me a paper cut and pour lemon juice in it?  OK, it wasn't that bad.  Ultimately, we got the hang of it and soon were enjoying the freedom of being able to travel around southern England at our own pace.  That's probably the best part of having your own transportation; not being beholden to train schedules, not having to tip a cabbie, not having to walk to the nearest public transit station.  Just get in the car and go.

And go we did.  Across the nearly-deserted country roads of the Salisbury plain where Stonehenge appeared on the horizon like a rocky mirage.  To Anne Hathaway's house (that's Shakespeare's squeeze, not the Hollywood actress) in the town of Stratford-Upon-Avon where William may have found inspiration for his love stories. And to Dover on the southeast coast, where we stumbled upon the unexpected gem of Dover Castle, on our way to view the magnificent white cliffs.  You never know what you'll find when you're able to get yourself off the beaten path driving through a new land.  Just don't get yourself stuck with "one of THOSE."

US State Department Talks to "Get Packin'"

When the U.S. State Department issues a 'Travel Warning' or a 'Travel Advisory' or a 'Uh, uh, uh. Don't go there!', what exactly does it mean?  We get to the bottom of it when Rachel Crawford, Citizen Services Officer with the State Dept. joins us for Get Packin' this Saturday at 4:00 p.m. on Freedom 95 (95.9 FM and 950 AM or streaming worldwide at freedom95.us).  She'll help us navigate the often confusing and sometimes vague warnings issued for international travel.

What are the happiest countries on earth?  We have the results of a recent in this week's Top Ten. Spoiler alert:  America didn't make the top ten.  The good news, we didn't make the bottom ten, either.  We'll have that list, as well.

Our travel tip this week is to make you aware of some common scams that you might fall victim to. The "Chatty Cathy" scam?  The "Friendship Bracelet" rouse?  The old "Switcheroo"?  You need to know the details and what to look out for.

May marks the beginning of the Alaska cruise and travel season, so we'll have more info about travel to Alaska as our Hot Destination.  Airline profits were WAY up last year, so what does that mean for you?  We'll tell you.  All that and more on Get Packin' this Saturday afternoon at 4:00.