What's the English Word for...?

The following is an excerpt from our forthcoming travel book, "While We're in the Neighborhood" 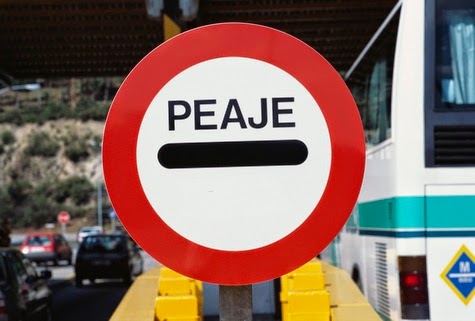 One Semester of high school Spanish does not prepare you for driving through Spain.  "Si", "No", "Gracias" and "Donde esta el bano?" is pretty much the extent of my bilingualism.  So as we got ready for a 2002 driving trip that would take us from Barcelona to the French Riviera, we thought it would be a good idea to get one of those electronic translators.  Select your 'language from' and 'language to', type in the word or phrase and, Voila!  You have your instant translation.  (By the way, what's the English word for "Voila"?)

The translator works just fine when you're strolling through a tourist attraction or sitting in a restaurant, when you have time to casually type in the word you're looking for.  But when you're cruising down the Spanish version of an Interstate at 70 m.p.h. with highway signs flying by, well... not so much.

We arrived in Barcelona by train from Madrid and picked up our rental car.  After a couple of days driving our way around the coastal city with few problems, we set out on our journey along the Mediterranean toward Nice, France.  Shortly into the drive, we were able to discern from the signs (even without the aid of our translation gadget) that we were going to have a choice of two roads that would get us to the same destination.  What we couldn't figure out was one additional word on the signs: peaje.  That was our choice.  To peaje or not to peaje.

I was at the wheel while Ann was gamely trying to find the translator and set the proper 'from' and 'to' languages.  The exit was fast approaching.

But the exit was, and a decision had to be made.  I guided the car toward the sign that said peaje. There was no turning back now.  We were headed for the Spain/France border via peaje, whatever that meant.

Merde!  That's not Spanish, but it was appropriate under the circumstances.