Ruins of the World: Pompeii 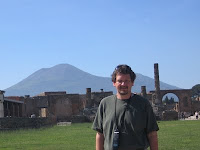 I love ruins.  There is nothing more exciting than scrambling all over an ancient site where a once great civilization lived and ruled.  There is so much you can tell about them and how advanced they were just by what is still left behind today.  But usually ruins are just that:  ruins.  You can tell where a wall or a roof might have been, but in many cases, there’s just not much left.  Not so with one of our favorite sites:  Pompeii. 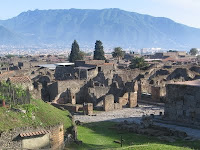 Pompeii was covered with ash back in 79 AD by an eruption of Mt. Vesuvius which is still an active volcano today near Naples, Italy.  That ash buried Pompeii, but at the same time it preserved it.  The ancient city was completely forgotten until accidentally discovered again in the 18th century.

In recent history, archeologists have worked to uncover it and what they have found is a city frozen in time. The cobblestone streets appear as they did when Roman chariots rode them. 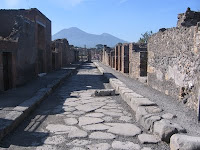 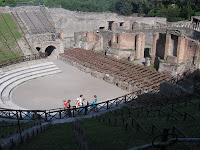 There’s a roman bath where you can still see what’s left of the beautiful fountains and artwork on the ceilings.

On one well-preserved street there is a bakery with a large stone that was used to grind the wheat for bread. 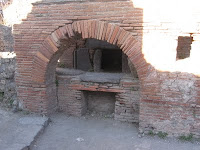 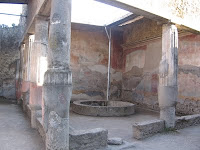 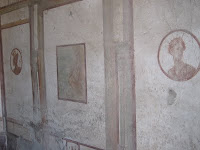 What is really unique about Pompeii is that the homes were preserved.  Most world-renowned ruins are of temples or monuments, such as in Egypt, but homes were usually made of wood or mud or lesser materials that wouldn’t last through the centuries.  In Pompeii you can actually walk in someone’s home and see their courtyard and, in many cases, mosaics and paintings on the walls, still very colorful today. 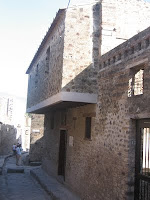 One of the most interesting buildings that is very well-preserved is a brothel.  It’s a 2 story building that actually had “menus” painted on the walls where a “patron” could order what he wanted.  These “menus” are amusingly graphic and still amazingly visible today. 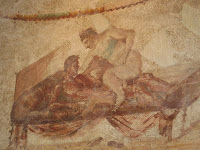 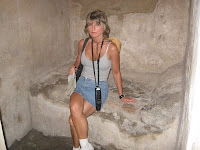 The brothel had stone beds and even a toilet which looks like a latrine.


One of the most amazing things of all in Pompeii, however, is that archeologists have found bodies of victims.  Actually what they found was the space where a decomposed body had been.  They then filled it with a polymer and were able to basically make a “cast” of the body. 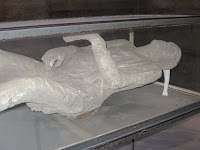 You can actually see the victims’ tortured positions as they succumbed to the ash.  It’s chilling and it’s about as close as you’ll ever get to a 2000 year old body.

You can spend a whole day walking this fascinating place.  We’d recommend the audio tour.  There’s also a sound and light show at night that re-enacts the eruption.  The Roman Empire is one of the greatest stories in history, Pompeii is like walking back in time to where the average Roman lived. 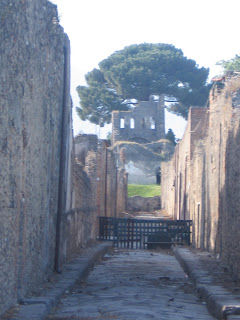 While We're in the Neighborhood...

The first international trip Ann & I took together was for our first anniversary in 1996.  We went to Paris and London.  Fairly relaxing.  Very romantic.  It’s not unusual for someone to visit those two countries on the same vacation.  That’s what they built the “Chunnel” for, right?  In subsequent years we traveled to Italy and Greece, England and Scotland, Germany and Switzerland, Spain and France.  But since then, Ann’s taste for travel has become a bit more, shall we say, ambitious.  It was around 2004 that I started to recognize her ever more insatiable need for better and longer trips.  I call it her “While-we’re-in-the-neighborhood” theory.
We were planning a trip to Rio de Janeiro for Carnival when she decided, “When are we ever going to go to South America again?  While we’re there, we might as well go to Peru so we can see Machu Picchu.”  Paris to London?  Sure.  Athens to Rome?  No problem.  Rio to Lima?  Uhhhh…  Let’s get some perspective.  Rio to Lima is like going from New York to L.A.  Not exactly a weekend getaway, but I was up to the challenge.  It turned out to be a great trip… and was only the beginning of the “While-we’re-in-the-neighborhood” travel.  Now, any international trip that doesn’t cover at least three countries is a waste of time.  And if it is less than three, they’re most likely going to be at opposite ends of a continent.  2005: Japan, Thailand and Hong Kong.  2006: Kenya and Egypt.  2008: Tahiti and Easter Island.
But perhaps the zenith of Ann’s “While-we’re…” ambition came last year in a trip to South and Southeast Asia.  Not just two countries.  Or three.  Or even four.  FIVE countries in one trip!  India, Tibet, Vietnam, Cambodia and Singapore.  14 airports in 14 days.  Oh sure, it was great.  And the sites were spectacular, contrasting the ancient rustic beauty of Cambodia’s Angkor Wat with the gleaming 21st century skyscrapers of Singapore, with the Taj Mahal thrown in for good measure.  But if I thought too much about what it was going to take to complete a journey of some 26,000+ miles, I’d have been curled up in the fetal position.  Don’t get me started about what it takes to get visas and permits to get into Tibet.  That’s a story for another blog (or a six-part Ken Burns mini-series on Discovery).
The Lonely Planet blog recently had a debate: one destination vs. multiple countries.  It’s obvious which side of that debate Ann falls on.  I have come to embrace Ann’s “While-we’re-in-the-neighborhood” travel style.  It has made for some amazing adventures and wonderful memories.  Next up: back to Europe later this year for stops in Germany, Hungary, Czech Republic, Belgium and The Netherlands.  Oh, did I mention we’re doing all that by car?  I’ll let you know how that goes.

I think I was born traveling.  My earliest memories are of my parents sticking my sister and me in the back seat of our car on what would now be a highly illegal bunky board, with no seatbelts, and heading out.  Later, they bought a camper and I was drug all over the country riding in the back.  Traveling in such close quarters is not something a maturing young girl really wants to do.

We hit all 48 contiguous states and by the time I was in 4th grade we visited Hawaii too on the first of what would be numerous trips.  My parents loved Hawaii and wanted to move there.  They were able to spend many winters there in retirement, and, in fact, both their ashes are scattered on Diamond Head according to their wishes.  When I was 18 we traveled on a Holy Lands tour for a month that included Egypt, Israel, Jordan, Syria, Lebanon, Rome and Greece with unbelievable sights that most people only dream of seeing.  Then at 19, I got married and moved to Tehran, Iran where I lived for a year and a half.  But that’s another story.

I didn’t realize at the time what a great gift my parents had given me.  Not only did I get to see these historic and iconic wonders of the world for myself but it instilled in me a lifelong love of travel.  In fact, I am not ashamed to admit that I am a travel junkie.  Nothing gets me more excited than traveling to some far-off exotic place. The downside is that it’s getting harder and harder to feed the addiction.

I have now been fortunate enough to visit all 50 states, 65 countries and 6 continents…..so far.  The plane’s wheels usually haven’t even touched down from one adventure and I’m already planning the next one.  And that’s the way I see our trips, as adventures.  I do actually have a travel bucket list and I’m checking them off steadily and we have a huge wall map in our basement tracking our travels.  Travel is my passion.  It is an education like none other.  Not only does it bring history alive and make geography personal, but you learn so much about people from other cultures.  In today’s world, it wouldn’t hurt if we knew a little bit more about the other people on the planet.  Luckily, John, my second husband, was okay with my obsession and has been a willing participant and even an enabler.  More soon!  Ann